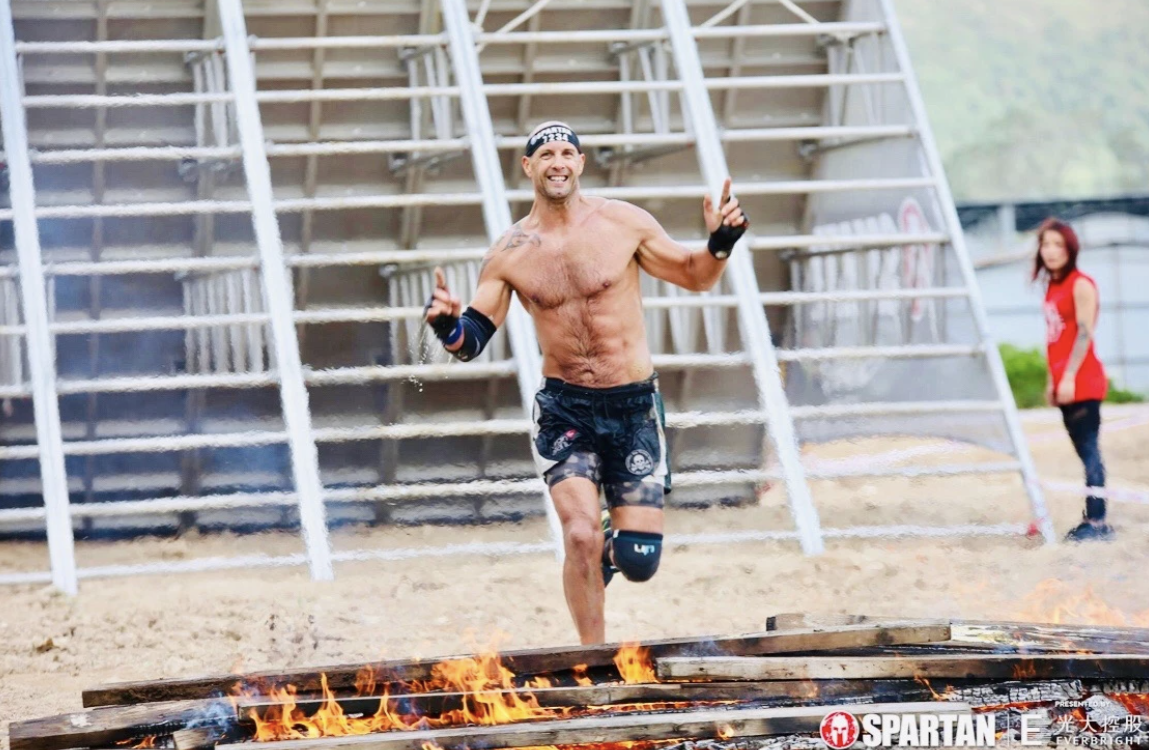 Beast Mode: You Have to be Relentless

If you’re a regular at Kapuhala you might have seen him last year setting up shop. In the back-patio space, he was toiling away creating a spear throw target, building a wall climb and fashioning other obstacles. Maybe you crossed paths with him while waiting in the corridor for your Bodypump class to start. There’s also a good chance he’s run past you while walking on Discovery Bay Road. This November he competed in the Hong Kong Spartan Races and placed first in all three categories—Sprint, Super and Beast. The fitness phenom I’m talking about is Simon Passmore. 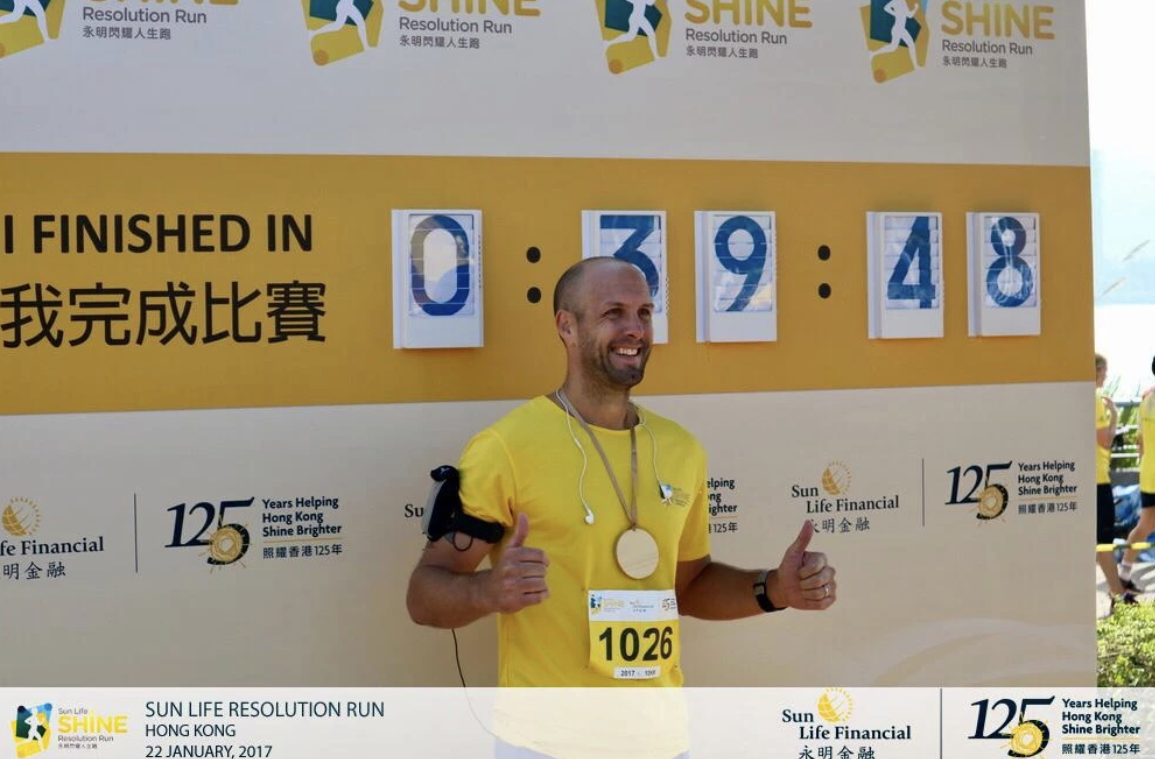 He’s mild-mannered and I’ve never spoken with him other than exchanging a few pleasantries or in conversation about gym talk. Tasked with writing this article, I had the opportunity to talk with him about his life, road to fitness and, more particularly, Spartan Races. He immediately came to life and the passion for fitness and Spartan exuded from every pore of his being. Sitting before me was a person working towards living his life with intentionality, trying to find his own way in the wild and messy world that we all live in.
His life now couldn’t be more different than his recent past. Simon travelled and lived in places like Spain, Texas and South America. Being one to seek a real career, as he told me, he ended up in the banking sector, first working for Merrill Lynch and then Citibank. In 2010, Citibank relocated Simon and his family to Hong Kong. He’d always been physically active. In 2008 he ran his first marathon. Living in Hong Kong gave him more time to devote to fitness. He set himself the goal of running 10km within 40 minutes. It took him seven attempts, finally achieving his goal in the 2017 Sun Life Resolution Run.
But life throws curve balls—big ones at that! Citibank made him redundant and his family life dissolved. Divorce. His ex-wife and daughter moved to New Zealand. Simon was at a crossroads. He spoke frankly. I pondered how he got through it. Simon told me that one day at the gym, in the midst of all of it, he decided to retrain as a personal trainer and Spartan coach as he had already completed his first Spartan race the year before. I was sceptical. I wasn’t sure if you could really have such a positive outlook in the eye of the storm and so I pressed on about the stress and anxiety that comes with a landmark life change. Simon smiled and said that when he left Citibank he was cartwheeling out of there. Cartwheeling! Indeed, looking back he wished he’d left sooner. He felt like a small cog within a larger machine and he couldn’t see much tangible benefit that his job had in giving back to society. Human beings are conservative creatures; many of us don’t examine our way of life or make adequate changes unless some external force bears down on us. In Simon’s case, these changes were openings. Summer of 2018 he competed in his first Spartan Beast Race in Malaysia and won his age group category, finishing 30 minutes ahead of the second-place winner.
Why Spartan Races? Of all the things one could possibly focus on, what was it about Spartan Races that made Simon want to get up in the morning and do it all over again the next day? He gave me a primer about the history of the Spartan Race. The Spartan Race was founded in 2010 by Joe De Sena, an American entrepreneur. De Sena, fed up of sedentary office life, wanted to make trail running more exciting and introduce it to a wider audience. His thought: why not add the challenge of completing obstacles in between running and add a penalty if you can’t perform those challenges. Failure to complete any obstacle requires the participant to perform 30 burpees. Thus, the Spartan Race was born. At present over 30 countries worldwide host the Spartan Races. There are three main categories: Sprint, a 5km race with 20 obstacles; Super, a 10km race with 25 obstacles; and Beast, a 21km race with 30 obstacles. There are even Spartan Races for kids! 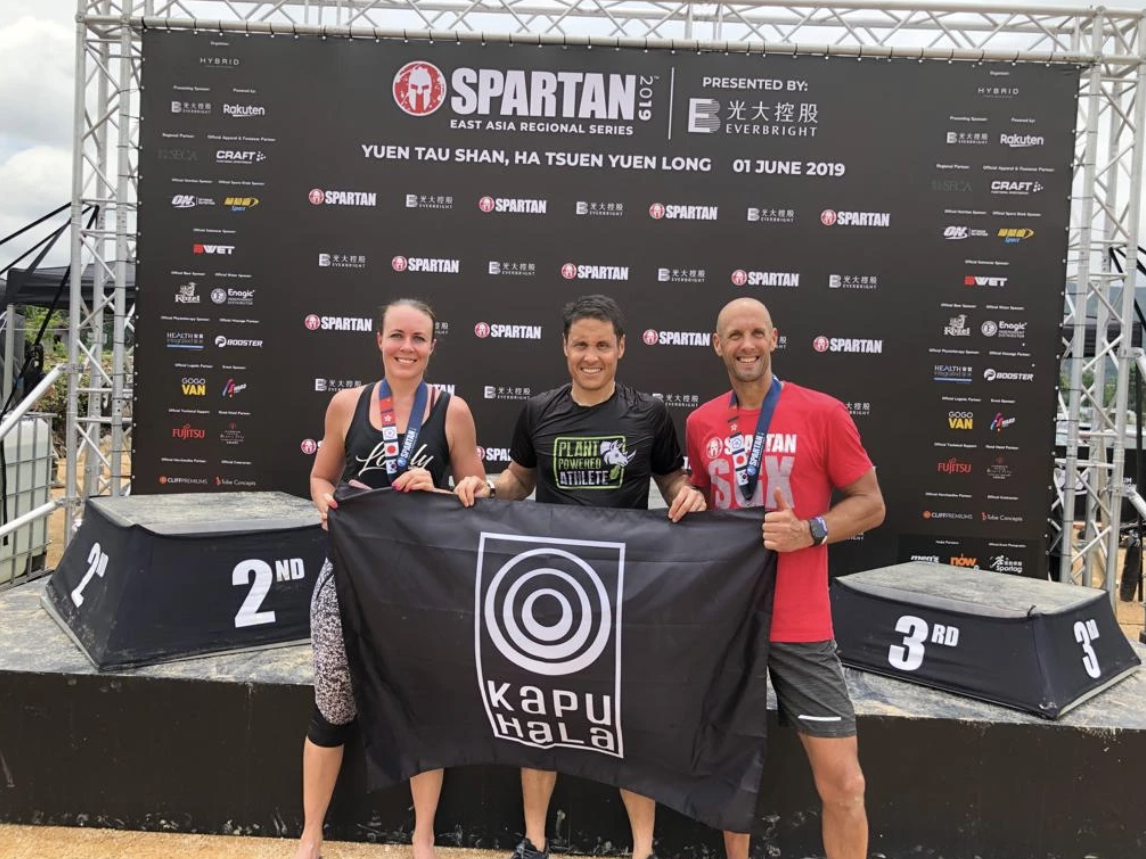 It’s about getting “butts off of chairs,” as Simon says. Just as important, is the comradery and fellowship that’s formed amongst racers. Simon spoke often and emphatically about the Spartan community. He’s made friends with other racers and it’s always exciting when you go afar for a race and recognize those you’ve already met. It is this social aspect that he finds cropping up in all areas of his life now, especially personal training. As a personal trainer, you’ve got to make working out fun and help clients dig deep within themselves to push past their barriers. It’s not all about the self; it’s about others too.
For Simon, the Spartan philosophy is a fitting methodological approach to life. Just like in life, during a Spartan Race, you confront obstacles that you have no prior knowledge about. At first, trial and error is the logical approach, but failure results in burpees. Those burpees rapidly accumulate with every botched task. So, you have to think beyond trial and error. You have to prepare in order to give yourself better odds. Relying on others to support you in your growth and development is the Spartan way. Simon told me how when he was practising rope climbing a fellow gym member came up to him and told him he was doing it all wrong. She showed him the ‘J’ technique that involves sandwiching the rope between the feet. In clinching the rope between one’s feet, a person’s body weight is supported and it makes it easier to climb. Everyone has something to offer and lessons like these make all the difference.
In the fall of 2018, Simon thought about how to give others the best chance at running the Spartan Race. Most Spartan training classes on offer are gym-based workouts— a mix of circuits, resistance training and cardio. Instead, he thought why not mimic an actual course. We’re fortunate to have the sort of terrain and greenery that we do in Discovery Bay, so he scouted around the area to make a course and set up obstacles along the way. The Kapuhala Spartan SGX course is the first of its kind in Hong Kong. 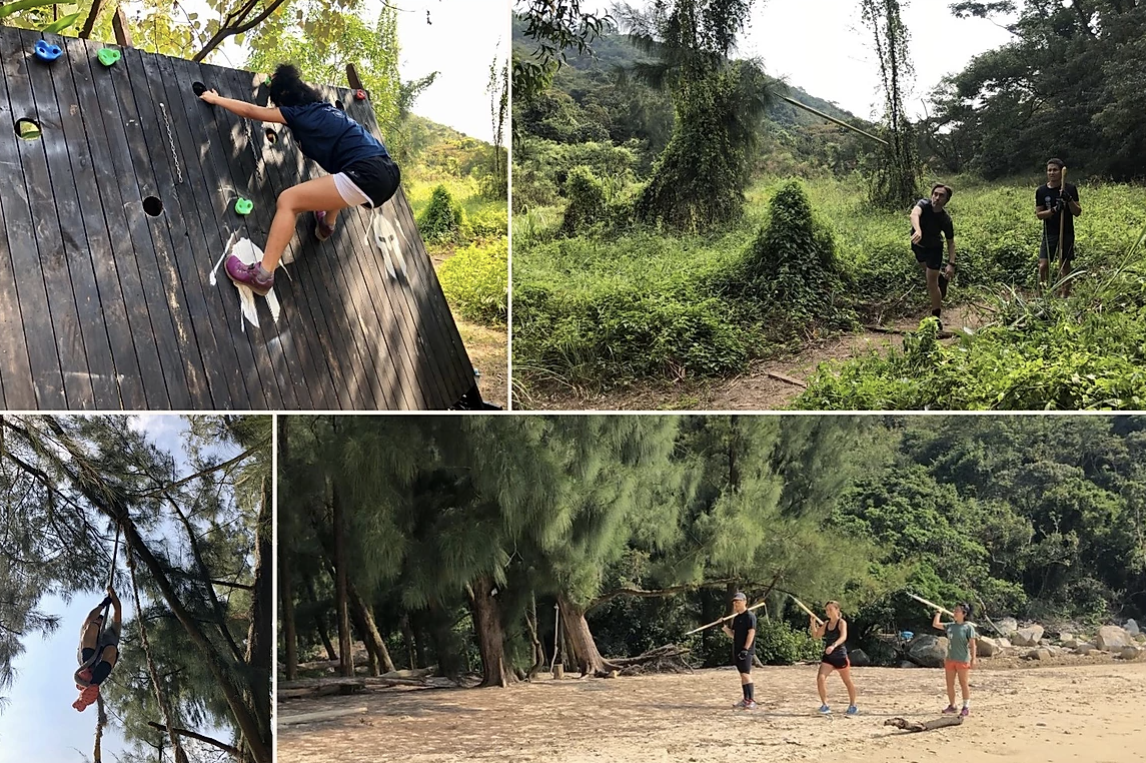 Not everything has been smooth sailing. During the Malaysian Spartan Race while doing the Tyrolean traverse (think: sloth-style upside down climb) Simon suffered a large rope burn and later on a knee injury. Working on rehab and recovery, he received an invitation to participate in the Spartan Ultra held in Iceland. The Spartan Ultra consists of a 50km run with 60 obstacles. The time limit is 24 hours. The environmental conditions are tough: there are only four hours of daylight and the temperature is around -10°C. To qualify for this race, you have to complete a Spartan Beast. The conditions, scenery, tasks and other participants made for a milestone moment. He finished the race and suffered an injury to his other knee, but Simon spoke of it as truly life-changing.
I asked how he manages to keep up his motivation to continue on in spite of those moments when you’re down, frustrated or simply lack the will power. He admitted that he’s only got one mode; he works himself to exhaustion. His own personal mantra is, “You have to be relentless”. Tenacity and perseverance are attributes that get one through life. Not all people are built the same way and understanding this Simon echoed the point made by many successful people: incremental changes and feasible targets will help get you to your larger goal. Start small. Incorporate changes that fit your lifestyle now. Once those patterns set in you can make additional changes. Breaking things down makes life more manageable, rather than a wholesale overhaul. 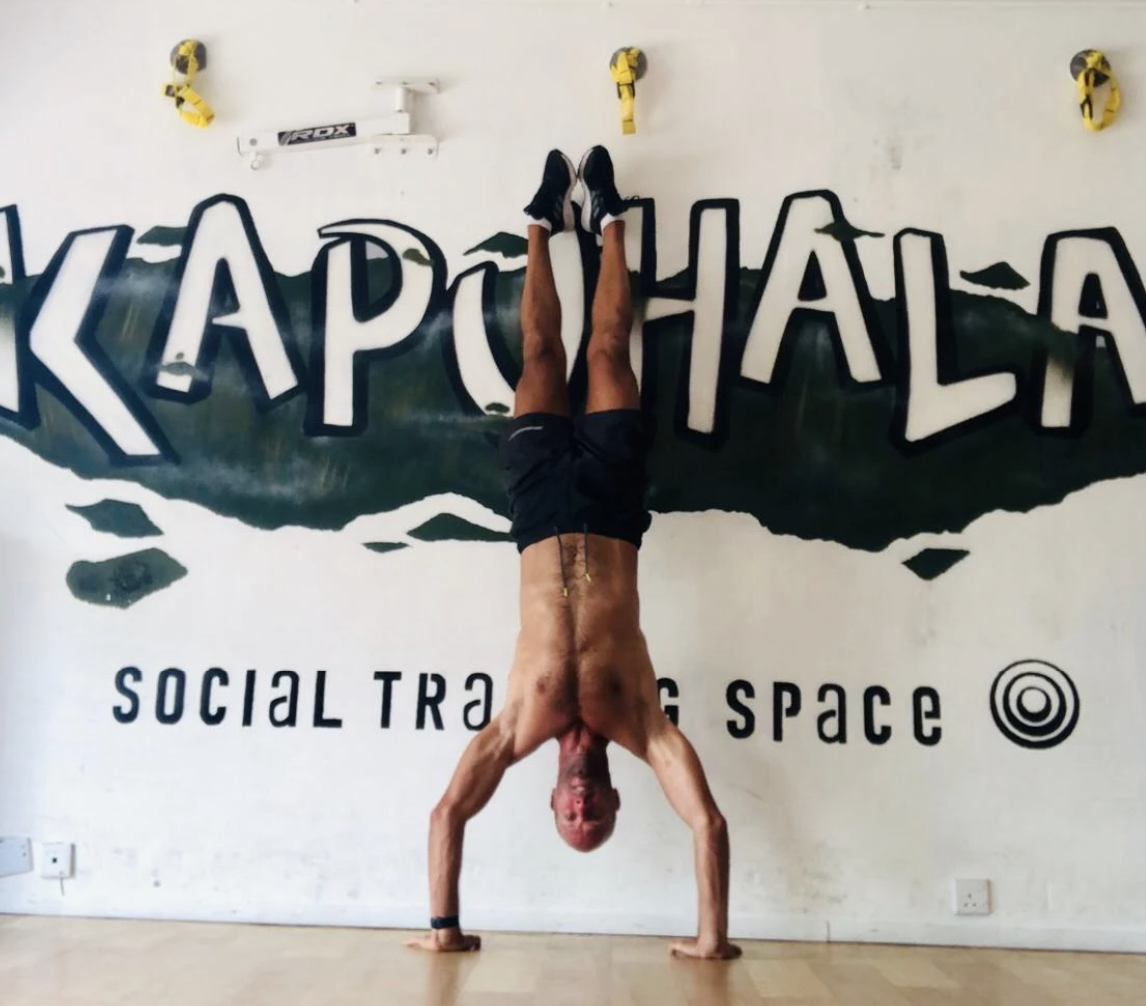 Recently, Simon’s gone plant-based. It seems to be the current trend. There’s so much published about plant-based diets and it’s often hard to make sense of the overwhelming amount of information. While there are those that adopt this diet for religious, ethical or environmental reasons, this isn’t Simon’s stance. He’s taken to it for practical reasons. For Simon it’s about physical recovery. It’s about efficiency. He’s able to recover faster and better between races. Often times he participates in multiple races a day. So, he has to be on point. A plant-based diet provides more antioxidants and helps combat inflammation. When you acquire a certain level of fitness, your body starts talking to you; you respond in kind. Simon tells me that at 49 he’s never been fitter and his metabolic age is that of a 26-year-old man.
What’s next on the map for Simon? He wants to try his hand at more Spartan Races out in Europe and do some of the stadium races, which are more of a sprint style course. He’s also working toward becoming a Spartan Ambassador, something which I think will very likely happen in the near future. I wish him well.
Simon Passmore is certified as a NASM personal trainer, Spartan SGX coach and TRX coach and Precision Nutrition L1 coach.